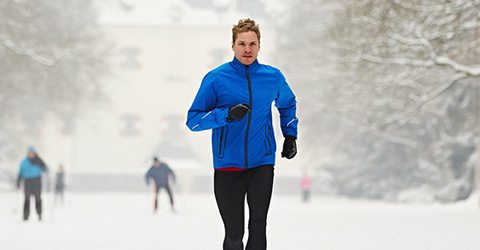 For most of the country, afternoons at the beach are out of the question, and so are the hours and hours of sunshine that make it easier to get to the gym early in the morning or late in the evening. Instead, most of us are faced with dropping temperatures and decreasing amounts of daylight, a combination that can make it hard to stay motivated. We know. We’ve been there, too. But just because winter’s here doesn’t mean you should stop hitting the gym. It’s all a matter of perspective, so we called up Jay Cardiello for some help. The Gold’s Gym Fitness Institute expert and personal trainer to celebrities gave us five tips guaranteed to help stave off those winter blues.

Eat with your non-dominant hand

The holidays are a time when unhealthy food is everywhere, from office parties to family gatherings. Rather than succumb to temptation, focus on staying on your game. One-fifth of the calories you consume come from what you drink, so be smart about alcohol at parties (think light beer and hot toddies). If you’re going out to dinner, look up the menu beforehand and decide on a healthy dish, helping eliminate the urge to splurge on a high-calorie dish. Finally, try this trick: “Eat with your non-dominant hand,” Cardiello says. “It really slows down how fast you’re eating, which will really help with caloric intake.”

According to a study by researchers at Appalachian State University, people who spent at least 20 minutes doing moderate aerobic exercise five times or more per week were sick about 60 percent less than people who didn’t. The theory is that endorphins, which are released during exercise, have positive immunity-boosting effects that last well after when you stop sweating.

Choice of apparel can be tricky when it comes to working out in the cold. Keep in mind the fact that you’ll heat up as you start working up a sweat. Cardiello understands: “You want to dress for success. When walking or running outside, dress like it’s five to ten degrees warmer. The worst thing in the world is when you go outside and start your walk or run, and all of a sudden you’re sweating and you have to take off a bunch of layers.”

Have an accountability buddy

Let’s face it: sometimes, we could all use a little extra motivation to get to the gym. That’s why it’s not a bad idea to get a personal trainer. They will hold you accountable for showing up and get you in shape once you arrive. Cardiello suggests taking it one step further, too: Make a deal with someone you trust that when you miss or skip a workout, you’ll pay them $5 or $10. “The accountability creates a motivating factor,” he says. “You want to invest in your success.”

Burn calories faster in the cold

Researchers from Maastricht University in The Netherlands found that being cold helps burn calories, which makes sense when you think about it from a physiological perspective. Your body is working harder to regulate your core temperature, which means it needs more energy, which means it will shred calories quickly. A separate study reported that both exercise and cold helps turn white fat into brown fat, a substance that burns calories even faster.