Your Guide to Healthy Dining Out

Make a plan before visiting your favorite restaurant.

You work hard to maintain your healthy lifestyle with meal prep, portion control and balanced plates throughout the week. When “cheat day” comes and you allow a guilty pleasure meal, Gold’s Gym nutrition expert Kritikaa Agnani says you can satisfy your cravings without sabotaging your diet.

Agnani looks at popular menu items and offers these modifications and substitutions to help you order healthy food when eating out. 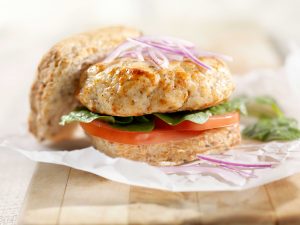 Americans eat nearly 50 billion burgers a year, making them arguably the most-ordered item on the menu. (McDonald’s claims to sell 75 burgers every second!)

One way to order a healthier burger is to substitute the meat.

“Burgers usually come from ground chuck meat, which is usually high in saturated fat,” Agnani says. “Switch to a turkey burger or a veggie burger instead.”

Regardless of the meat you choose, deconstruct the burger to make other healthy modifications to meet your goal: Skip the cheese and leave the sauces on the side (to cut fat and calories) or bypass the buns (to cut carbs).

“Most restaurants have whole wheat options,” she says. “That’s a better choice than regular buns, if you want the bread. Whole wheat has more fiber and will keep you full longer, which means you’re less likely to overeat later.” 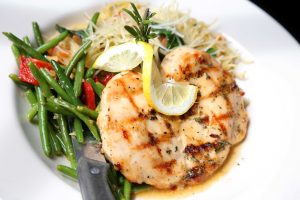 There are a couple of things to remember when ordering chicken: the color of meat and method of cooking. 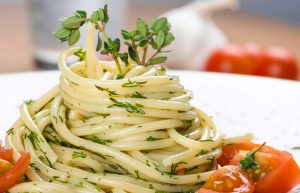 It’s really easy to overeat pasta because it’s usually served as the main course, Agnani says. There are a few ways to enjoy it without overindulging.

“Box up half of your meal so you’re not filling up on just pasta,” she says. “Look at it as a side dish rather than the main dish. Have a small portion and fill up on veggies or salad. Try to add a little protein so you don’t get hungry again right away — eating a lot of carbohydrates is not going to keep you very full.”

If your goal is to cut fat and calories, choose dishes with tomato sauce (marinara) over ones with creamy sauce (alfredo) and skip the ones with meat sauce altogether.

“Order spaghetti or penne pasta rather than ravioli, lasagna or ziti,” Agnani says. “Those already have layers of sauce and cheese baked in, and therefore more calories.”

Ask for whole wheat pasta and decline the added Parmesan when the waiter comes by with the cheese grater. 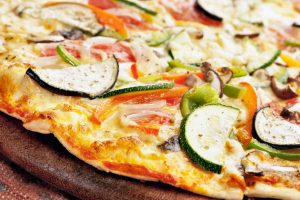 Dabbing up grease from a meat pizza isn’t a bad idea, but it’s not making that pie healthy, either.

“How much fat and calories are you really taking out by doing that? There’s no answer,” Agnani says. “It’s not a very reliable way to make your pizza better for you.”

A good rule of thumb is to load the pie up with more veggie toppings than meats (to cut fat, calories and sodium) and go light on the cheese. As with other bread-based items, ask if whole wheat crust is an option. If not, order thin crust instead. 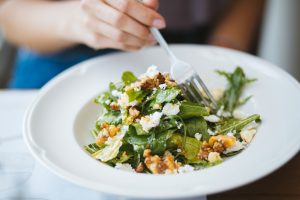 Toppings and dressings can derail an otherwise healthy salad order.

“Ask for the meat and cheese toppings and dressing on the side,” Agnani says. “Dip your fork in the dressing before stabbing a bite of the salad. You’ll get the flavor with fewer calories.” 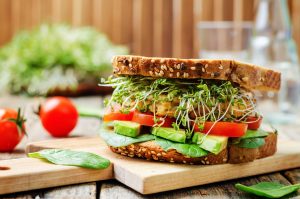 The deconstruction strategy applies here, too: Order whole wheat bread, use spreads and sauces minimally (less sodium and calories), add a lot of vegetables and choose lean meat such as turkey over salami, bologna or roast beef. 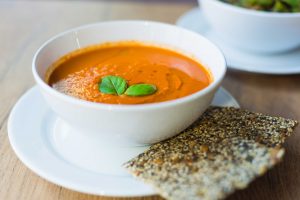 “Soups tend to be high in sodium,” Agnani says. “Only have a very small amount if your goal is to lower your sodium intake.”

Generally, tomato- and broth-based soups have less fat than cream-based ones. Keep that in mind if you’re monitoring your fat and calories. 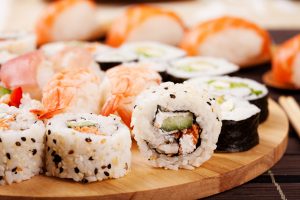 Luckily, sushi is already a mostly healthy food to order and one of the easiest to make even healthier, Agnani says.

“As long as you’re staying away from menu items that say tempura (fried) and fatty (some fish), you’re OK,” she says. “You can also ask if they have brown rice instead of white or do a roll with no rice at all.”

Soy sauce is high in sodium, but the amount used to dip sushi is so minimal that Agnani says you don’t have to skip it completely. However, if you’re watching your intake, use the low-sodium version (the bottle with the green cap).

Gold’s Gym has been defining the fitness industry since 1965. From its beginning as a small gym in Venice, California, Gold’s Gym has grown into a global icon with nearly 700 locations across 6 continents. Featuring state-of-the-art equipment, certified personal trainers, a diverse group exercise program and a supportive, motivating environment, Gold’s Gym delivers a dynamic fitness experience focused on strength and performance. More than a gym, Gold’s Gym combines coaching, community and more than 55 years of fitness expertise to help people around the world achieve their potential through fitness.