This Gold’s Gym Challenge participant uses his new lifestyle to set a positive example for his family and the social media followers who are tracking his journey.

For most of Maurice “Mo” Monroe’s life, his weight wasn’t a problem. As an active kid growing up in Yuba City, California, he played basketball from elementary through high school and could eat whatever he wanted: mac and cheese, fried chicken, Chinese takeout.

After college, Mo enlisted in the military, and in 2010, when he was expecting a baby with his then-wife, he put on a few pounds of sympathy weight. He added even more between 2012 and 2015, indulging in hearty helpings of the local food and wine while stationed in Italy. At the time, he hardly noticed the weight gain.

“I never really looked in the mirror to see how much I changed,” Mo says.

While looking through family vacation photos, Mo came across an unflattering shot of himself in a muscle T-shirt. His belly looked round — he was stunned.

And he decided to do something about it.

Starting on his own

In 2016, with three children — daughters Jaliyah and Jakari, and son Jakobe — and having just moved to San Antonio, Mo didn’t think he had the time to work out. But he did think about some of the health problems that are common in his family: diabetes, high blood pressure, cancer.

“I knew I needed to get in better shape — not just for myself, but for my children,” he says. “I want to be around to see them grow, and I hope to set a healthy example.”
Mo started by going on early morning runs. When he learned that the Gold’s Gym near his house had a Kids Club, this father signed up. This way, he could work out while his kids played games, colored and watched movies. 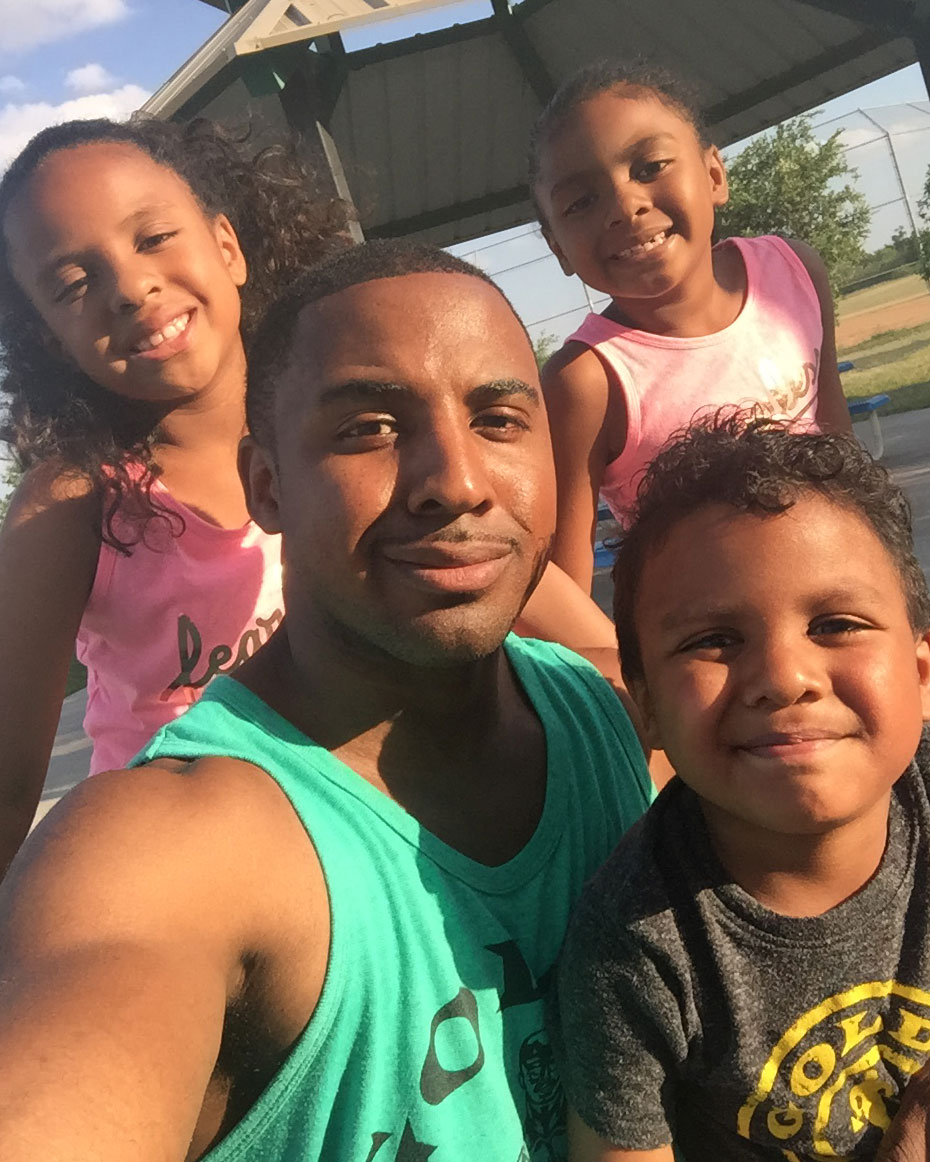 Every day for the 12 weeks of the Challenge, he posted pictures and videos of his workouts, meals and daily inspiration to Instagram. In one video, he and Jaliyah perform cardio moves in their living room. In another, she’s perched on his back as he does push-ups.

“Yeah! Come on,” she cheers, smiling at the camera. “You got this, Daddy!”

By the end of the Challenge, Mo cut his body fat from 12.4 to 8.1 percent, gained seven pounds of muscle and was declared a winner in the Document Your Journey contest.

“Along the way my why for working out changed,” he posted on the second-to-last day. “I never realized who was watching me work out cause a lot of the likes I get are spam or from people I don’t know. But as days went by I would get messages from people telling me to keep on pushing or that I was their inspiration to become healthy.

“It’s just the start of the next chapter in my fitness journey.”

The momentum hasn’t slowed down. In a typical week, Mo alternates muscle groups, working legs, chest, abs and arms on different days. He does cardio on the weekends and is a regular at Gold’s Gym BODYPUMP classes — keeping his Instagram followers posted every step of the way — all while continuing his military service.

Mo says he’s not worried about unflattering vacation photos any more. But most importantly, this father’s weight loss and dedication to a healthy lifestyle change has helped instill that same value in his children. A lot of the family’s free time is spent being active together: They love running outdoors, going to trampoline parks and playing basketball. Jaliyah and Jakari both participate in karate.

“I really emphasize physical activity,” Mo says. “Sometimes I’ll make them do push-ups and sit-ups, and sometimes they’ll make me lift them. They get a kick out of that, saying, ‘My daddy’s really strong.’”

Mo’s ultimate goal is to stay in good shape, so he can keep up with his family. He hopes that when his kids are in high school, he’ll still be able to go for runs with them. “At the end of the day, we all want to live a longer life for our kids,” he says.
Mo returned in April from a six-and-a-half-month tour overseas. His children were thrilled to see him, but Jakobe, still inspired by his father’s weight loss, had just one question: “Are we going to the gym, Dad?”

Read more success stories:
Her Personal Trainer Was So Inspiring, She Became One Herself
The Fire That Sparked His Change
Stronger Together