Married couple Damon and Hillary Ayon found each other at Gold’s Gym. Now, after going through the Gold’s Gym Challenge, they’re healthier than ever.

He’d just arrived for his 6 a.m. workout when he saw her.

By September 2012, Damon Ayon was a regular fixture at the Gold’s Gym in College Station, Texas. He and his friend, Justin, worked out five days a week, completing rounds of high-intensity circuit training.

Damon spent enough time at Gold’s Gym to be familiar with the employees there. So, on a Tuesday morning in the fall, he immediately noticed the new face behind the reception counter. She had long brown hair and a magnetic smile.

Her name was Hillary Gee. She’d recently transferred to Texas A&M University and got a job at Gold’s Gym to earn extra money. She thought Damon was cute, and she soon looked forward to her early-morning Tuesday shifts. She’d swipe his membership card, and he’d linger to chat. Weeks flew by, and their conversations added up. They realized they had a lot in common. They liked dogs and the same kind of music. They also bonded over their love of outdoor activities and physical fitness.

Their first date was to dinner and a movie, but things didn’t get serious until he invited her to attend a Silversun Pickups concert with him and his brothers.

“She fit right in,” Damon says. “One of the big draws was her unique personality.”

Hillary has always been a lot of fun to be around, he adds. “I’d never met anyone like her.”

A new life, but old habits

It wasn’t long before they were spending most of their time together. Soon, though, their workouts lapsed, and by the time Hillary graduated from Texas A&M University in 2014, the couple had developed some unhealthy habits. Every time they went to the grocery store, they’d get doughnuts. They also loved staying up late and binge-watching new shows. During their viewing marathons, they’d often get hungry and wind up in the fast food drive-thru.

In August 2016, Hillary and Damon got engaged while hiking at Yosemite National Park, and they married soon after in San Antonio. Though they were elated to start a new chapter of their lives together, they found they spent a lot of time reminiscing about how healthy they were when they first met. Off and on, they’d made the effort to get back to the gym and eat better, but the habits never stuck.

“We weren’t seeing the results we’d seen before,” Hillary says. “It was really frustrating.”

In December 2016, Damon saw a flyer for the 12-week Gold’s Gym Challenge. Hillary and Damon decided to tackle it together. For them, the Challenge wasn’t about losing a certain amount of weight.

“We’d always talk about what good shape we used to be in,” Damon says. “We just wanted to return to a form of health we were happy with.” 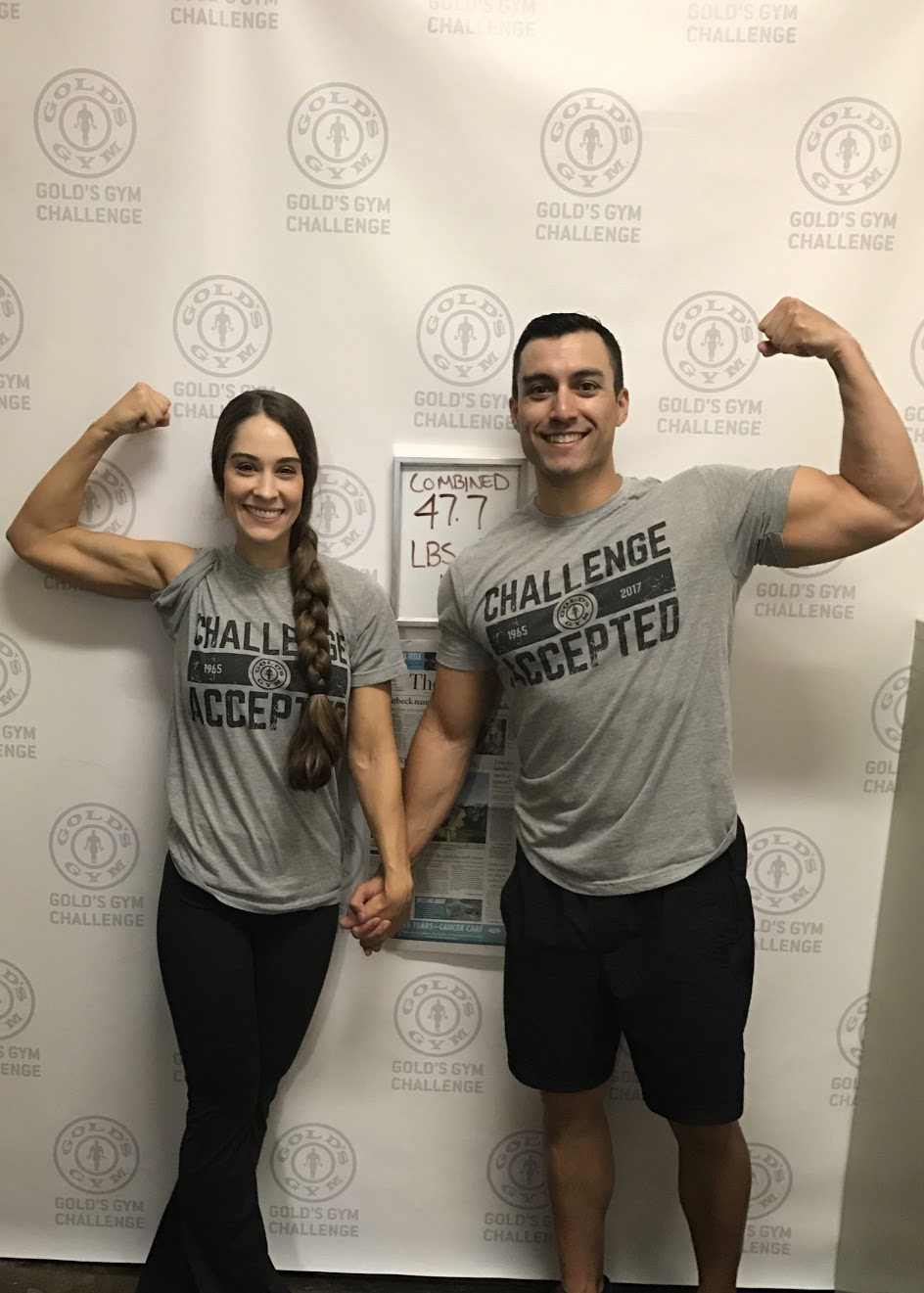 Together, the couple focused on exercises designed to promote fat loss. They worked out at Gold’s Gym five times a week, often doing high-volume weight training and treadmill-based cardio. While on the treadmill, they’d watch Netflix on their phones.

“We used to do that in bed with food, and now we were doing it as part of our workout,” Damon says.

The two leaned on each other throughout the contest. Damon didn’t have much interest in monitoring caloric intake, so Hillary stepped in to help. She focused on planning healthy meals and helped keep Damon’s diet on target. And when Hillary lagged during cardio near the end of the Challenge, Damon encouraged her to push a little harder.

Damon won third place in his age group. Hillary didn’t place, but she considers the endeavor a success — she dropped nearly 15 pounds. It also brought them closer as a couple: They’d kept each other accountable and helped each other see the Challenge through.

“In the end, this was definitely something for us to celebrate together,” Damon says. “We reminded ourselves of who we were when we first met.”

Recently, Hillary and Damon moved to Austin, where they plan to explore their shared love of the outdoors. They also have no intention of letting up on their gym workouts — Hillary says one of their main priorities is to buy a house close to a Gold’s Gym.