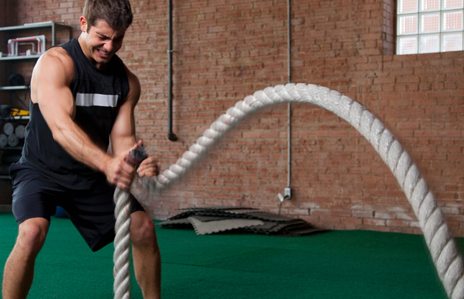 If you’re anything like us, you’re always looking for a new type of killer workout. Well, good news: We have one for you, and even the name makes us want to throw on our gym clothes and sprint to the nearest Gold’s Gym.

“Battle ropes are really dynamic in that they challenge your heart while challenging your core,” says Adam Friedman, a Gold’s Gym Fitness Institute trainer. “It’s all about making sure the core is staying stable, keeping the spine in line while moving your extremities.”

Use Battle Ropes To:

Friedman offers five moves to try at the gym. For each one, he suggests doing three 30-second sets with a 30-second rest between sets. Battle away!

Note: Friedman suggests that anyone interested in using battle ropes ask a trainer for assistance at the beginning. He frequently sees people end up with pain in their shoulders or other joints if they aren’t breathing properly or aren’t performing a move correctly. A consultation with a professional can prevent such problems and get you on the road to a fun, safe workout.

Start by standing in a half-squat position with your spine straight and your feet a little more than shoulder-width apart with your toes pointed forward. Take one rope in each hand and move your arms up and down together to create a wave in the ropes. You should keep your body stable, according to Friedman, focusing on an even tempo as if you’re beating a drum. This will work your forearms and shoulders as well as your core.

This one is similar to the Double Wave in both start position and execution, but instead of moving your arms together, move one up while the other one is going down, and then switch. “The waves can be small if the arms are pumping faster or bigger to work the shoulders a little bit more,” Friedman says. The offset rhythm works different stability muscles in your core than those worked by the Double Wave. This one also emphasizes your arms and shoulders, with the benefit of being a full-body workout.

Remember doing double Dutch when you were a kid? Well, this is double Dutch for adults. Take one rope in each hand and make circles, your right arm going counterclockwise and your left going clockwise. After each set, switch the direction that you move your arms. This one will work the forearms in addition to the shoulders and the core.

This is the most advanced move, combining the Double Wave with a second exercise. Your arms do the Double Wave, but instead of keeping your feet still, step back with your right foot and bring your knee to the ground. Rise and return your right foot to its original position, then repeat the sequence with your left leg. “Your whole body is going down and up while your arms are moving up and down,” Friedman says. “You’re combining the upper and lower body.” A total-body workout indeed, one that works the quads while it tones the arms, shoulders and core.